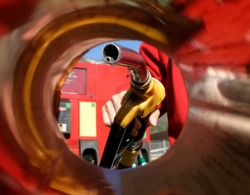 Q: Is it better to turn off A/C and open the windows while driving at higher speeds?

A: No, because with the windows down greatly increases aerodynamic drag.

From money.cnn.com: There's no question air-conditioning makes extra work for the engine, increasing fuel use. But car air conditioners are much more efficient today than they used to be. When driving around town, using the A/C will drop fuel economy by about a mile a gallon.

Meanwhile, driving at higher speeds with the windows down greatly increases aerodynamic drag. As speed increases, drag becomes more of an issue, making A/C use the more efficient choice at high speeds.*The best choice - if temperature and humidity allow - is to keep the windows rolled up and to turn the A/C compressor off. You can keep the fans running to blow in air from the outside, but your car will be as aerodynamic as possible while still letting you breathe. You will save gas, but the fuel economy improvement will be slight.

From Gabe Shenhar, senior auto test engineer at Consumer Report's auto-test department: "...to achieve maximum fuel efficiency, motorists should avoid using the air conditioner at speeds below 40 mph and travel with their windows down…"

Q: Is a clean air filter going to save you any gas?

A: No, maintaining your car is important, but a clean air filter isn't going to save you any gas. Modern engines have computer sensors that automatically adjust the fuel-air mixture as an increasingly clogged air filter chokes off the engine's air supply. According to Consumer Reports, while engine power will decrease slightly as the air filter becomes clogged, a lack of performance or an increase in fuel consumption will be negligible.

Q: Does using premium fuel at the gas station get more miles per gallon?

A:No, cars manufactured after the 1990s have an automatic sensor for the octane level of gasoline the engine is using. So unless premium gasoline is required by your car, it really won’t make much of a difference.

6. Easy Tips for a Healthier Car and Driver?

* Losing weight has any number of benefits for people, but did you know it's good for your car too? Removing excess weight from the cabin and/or trunk of your vehicle reduces the workload on your engine, helping maintain healthy (proper) mileage.

7. Car Having Behavioral Issues? The Truth behind "Good" and "Bad" Mileage:

*Good mileage is anything beyond the manufactures rate. You can also use the government suggested MPG ratings that set standards for the new cars.

*Bad mileage is whenever your car is running under its manufacturer's stated MPG rate. This could be for several reasons: perhaps you’re in need of a tune-up, or maybe your car is caring an unnecessary load (time to clean out that trunk). Another way to assess your mileage rate is to compare other cars in the same class.

Want to see how your ride should behave? Go to: fueleconomy.gov

8. Do you Actually Save Gas by Driving Slower?

*Yes: Research has shown that your car has to work harder the faster it goes. According to research by fueleconomy.gov and CNNMoney.com this is true. Traveling faster makes the job much harder because more air builds up in front of the vehicle, thus increasing drag.

*Every 5 mph you drive over 60 mph could cost you an additional 24 cents per gallon!